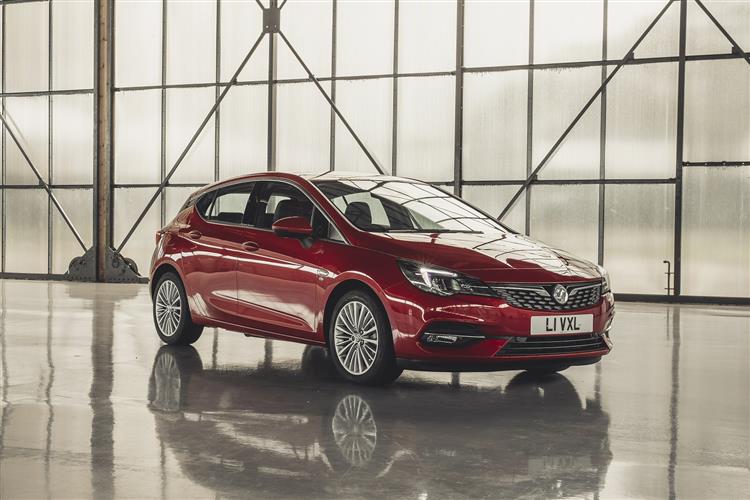 Despite Vauxhall's best efforts over more than three decades and six different generations, their Astra has rarely been the family hatchback its drivers would ideally have chosen to own. Not because it's ever been a bad car: just never a class-leading one. The kind of model you bought because it was good value. Or more likely, because you were given the keys by your company Fleet Manager. This seventh generation version was tasked to do better - and the signs are that in this facelifted guise, it just might. Since its Autumn 2019 facelift, it's smarter-looking, but more importantly, it's significantly more efficient than before thanks to a range of fresh 3 cylinder petrol and diesel engines; the most frugal diesel can eke nearly 65 miles out of a gallon of DERV on the now much-stricter WLTP official test. And even the petrols can get around 50mpg. It still drives well too.

We'd forgotten how good the Astra is to drive; if you happen to be familiar with the original version of this 'K'-series seventh generation model, you might not have. Relatively light weight and a clever Watts linkage suspension system made the handling of that car beautifully balanced, something further enhanced by the dynamic improvements made to this revised model - revised spring and damper rates that improve the ride over poor surfaces and fresh calibration for the steering which improves body control at higher speeds. The key changes here lie beneath the bonnet. Previously, there was just a single 3 cylinder engine in the range. Now the old units have gone and the line-up is built around this format. There's a 1.2-litre petrol powerplant developing either 110, 130 or 145PS and mated to 6-speed manual transmission. Vauxhall's particularly pleased with throttle response with this engine, claiming that 90% of its pulling power is available within 1.5 seconds of pressing the accelerator. The diesel engine is quite new too, a 1.5-litre three cylinder powerplant offered in two states of tune, 105PS and 122PS. The more potent version of this diesel unit gets the option of a new-tech 9-speed auto gearbox. These engines feature an electrically-activated turbocharger with variable geometry turbine vanes and, similar to their petrol counterparts, a balance shaft in the block for additional refinement. Torque output figures vary between 260 to 300Nm.

You'd struggle to recognise this facelifted model as being different from earlier versions of the MK7 Astra design. The only visual changes lie with small tweaks to upper and lower sections of the front grille, these apparently contributing to a more aerodynamic profile. As before, buyers choose between the standard five-door hatch body shape, or a five-door Sports Tourer estate variant. Fortunately, the exterior lines of the silhouette are wearing well. A nice touch is the 'floating' roof, an effect created by a dark trim on the C-pillar and highlighted by a chrome strip that runs the length of the roof. Inside, there are no changes but extra comfort can be specified in the form of high-end features like a wireless charger, a heated windscreen and a BOSE sound system. As before, infotainment's taken care of by the available Multimedia Radio, Multimedia Navi and Multimedia Navi Pro systems. All systems are compatible with Apple CarPlay and Android Auto smartphone-mirroring and the top-of-the-line Multimedia Navi Pro set-up has an eight-inch colour touchscreen and can also be operated by voice control. Rear seat space is class-competitive, as is boot space, 370-litres in the hatch and 540-litres in the Sports Tourer.

Prices aren't very different from before, starting from just over £20,000 and range up to around £28,500 across the range of hatches and estates spread across the usual wide range of trim options. There's a choice of four trim levels - 'Business Edition Nav', 'SRi Nav', 'Griffin Edition' and 'Elite Nav Premium'. Vauxhall wants to emphasise that safety standards have taken a decent step forward since this car was facelifted in Autumn 2019, this courtesy of the installation of a more sophisticated digital front camera, which is both smaller and more powerful than before thanks to a faster processor. It now not only recognises vehicles, but also pedestrians, greatly improving safety. Furthermore, thanks to the high-resolution camera, traffic sign recognition can now process more traffic signs and show them as symbols on the display. The digital rear view camera, available on selected models, is also more powerful, and works in conjunction with the new Multimedia Navi Pro infotainment system. Most models get Connected Navigation services with real-time traffic information, a set-up that uses online map updates to make the journey more relaxed, while the navigation display itself appears with redesigned symbols in a fresher, more modern look. The same applies to the instrument cluster, which features a redesigned digital speedometer. Optionally available is the E-Call emergency call function. If needed, help is just seconds away by pressing the red button. If the seatbelt tensioners or airbags are deployed, the system automatically makes an emergency call.

Put simply, you're not going to find an Astra that's going to cost you a huge amount to run. For the all three 1.2-litre units, the WLTP figures are up to 54.3mpg and up to 119g/km of CO2. The 1.5-litre CDTi diesels will manage much more. The 1.5 Turbo D unit in 105PS form manages up to 65.7mpg and up to 113g/km; for the 122PS version of this unit, the WLTP readings are up to 64.2mpg and 115g/km. Or 56.5mpg and 133g/km for the auto. Vauxhall reckons these figures are helped immeasurably by this Astra's slippery bodywork - it's one of the most aerodynamic cars in its class with a sleek 0.26Cd. For the Sports Tourer, the figure is 0.25Cd. The aero-benchmarks have been achieved through numerous measures, including an engine compartment cover, deflector-shaped rear axle control arms and a full-face shutter. The upper and lower portions of the new Astra's radiator grille automatically open and close independently of one another, further improving the frontal airflow. The underbody optimisation improves the drag coefficient by reducing turbulence. With all the new engines, integration of the water-cooled exhaust manifold in the cylinder head contributes to quick engine warm-up, which lowers emissions after a cold start. And the diesel unit gets passive oxidation catalyst, an AdBlue injector, an SCR catalyst and a Diesel Particulate Filter.

In a family hatchback class stuffed with appealing options, it would be easy perhaps to overlook this seventh generation Astra - or at least to assume it to be an also-ran in this tightly-fought segment. You shouldn't do that - and it isn't. Especially now. The new engines bring this Vauxhall back to the forefront of the Focus segment and offer levels of efficiency that rivals struggle to beat. And your local dealer is likely to give you a very sharp deal too. Assuming you get that, you'll also get yourself a car that feels quite up to the challenge posed by an army of efficient, plush and dynamically able rivals. Of course this facelift's package of improvements have helped here - the slightly smarter look, the extra safety provision and the additional luxury features. Best of all, it's mainly British, with hatch and estate models built at Ellesmere Port near Liverpool to a quality at least as high as anything the Japanese brands can manage. That reason alone might be enough to give this car a place on your family hatchback shortlist. Fortunately for Vauxhall, there are also many others.