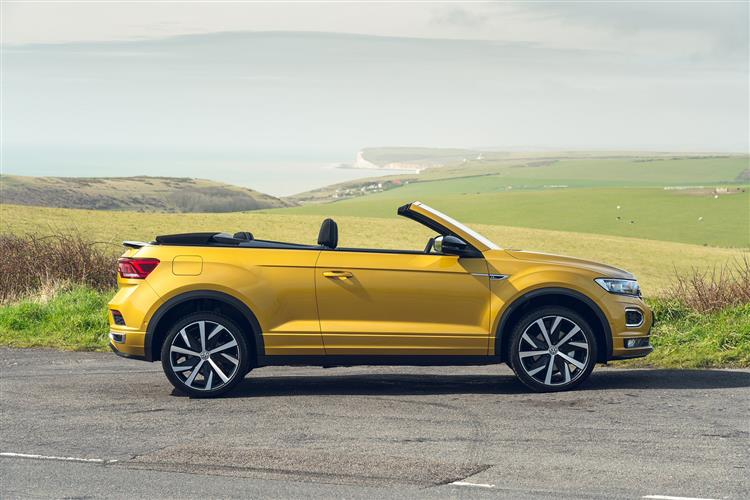 Given the fashionable demographic of SUVs and Crossovers, it's surprising that we haven't seen more convertible ones. Before the introduction of the open-topped model we look at here, the Volkswagen T-ROC Cabriolet, the only one we'd previously seen was the short-lived range Rover Evoque Convertible. Undaunted, Volkswagen was determined to bring T-TOC buyers this wind-in-the-hair variant, perhaps because all the brand's other cabrios of recent years (the EOS and open-topped versions of the Golf and the Beetle) are all long gone. It doesn't seem right that the VW brand should be without a convertible. And now that it isn't, what do we think of this one?

This is very much a boulevardier cabriolet for fashionistas - who'll want to know about the hood. It's a multi-layered fabric affair that lowers at the press of a button in under 12 seconds and stores itself neatly above the luggage compartment behind the rear seats. It certainly doesn't feel particularly sporty, first because you sit at SUV height. And second because the extra 194kgs of weight that this Cabrio variant has to carry around will become quite evident in the unlikely event that you're minded to try and start chucking the thing about. There are no petrol engine changes as part of this update: surprisingly, Volkswagen isn't introducing its mild hybrid tech. So, as before, there's a choice of two TSI units: a 115PS 1.0-litre TSI offered only with 6-speed manual transmission. And a 150PS 1.5 TSI EVO unit offered with either that manual 'box or a 7-speed DSG auto. Even that 1.5-litre version isn't exactly a ball of fire, making 62mph from rest in 9.6s en route to 127mph. We'd be tempted to stick to the smaller unit. There's the option of plusher 'R-Line' trim with lowered suspension and larger 19-inch wheels which together will give a noticeably firmer ride. Try before you buy. All versions of this car get a standard 'Drive Profile Selection' driving modes system that allows you to tweak throttle response, steering feel and, on DSG variant, gearshift timings to suit the way you want to drive.

Volkswagen turned to specialists Karmann to design this car, who in turn quickly realised that quite a few fundamental changes to the T-ROC chassis would be needed if the top was going to be chopped off this model. 37mm has been added to the T-ROC wheelbase, which has in turn added 34mm to this car's overall length. Plus a range of strengthening measures have been introduced for the floorplan, the doors, the sills and the windscreen surround. It doesn't stop there either. The four framed doors you get in a hard-top T-ROC here make way for a pair of longer frameless ones - and the usual B-pillars have been dispensed with too. At the wheel, the added rake of the windscreen and the closer proximity of its header rail (which is positioned rather close to the extent of your peripheral vision) gives a more enclosed, intimate feel than you get in a conventional T-ROC. You might quite like that. Less welcome is the fact that this cabrio design has a relatively high shoulder line, a shallower glass house and quite a high rear end, all these things contributing to more restricted over-the-shoulder vision. The boot capacity is predictably much reduced too -down to just 284-litres (it's 445-litres in an ordinary T-ROC). You can still get a couple of adults in the back for shorter trips though. The exterior styling tweaks made to this updated model are subtle. LED headlights and darkened rear tail lamps total the changes but you can add to them by paying extra for the brand's 'IQ LIGHT with LED matrix headlights' package. Inside, there's a smarter dash trimming panel. And a redesigned, more 'tablet'-like central infotainment screen, which can now be had in larger 9.2-inch form as well as the usual 8.0-inch size. All variants now get a digital instrument cluster too - optionally upgradeable to 10.25-inches in sizes in 'Digital Cockpit Pro' form. There's also a redesigned steering wheel and higher quality fabric door trim.

Prices start from around £26,500 - that's getting on for nearly £4,000 more than an equivalently-specified version of the fixed-top model, so you've really got to want the open-topped vibe here. You have to have entry-level 'Design'-spec if you're to have the base 1.0-litre TSI 115PS petrol engine. Otherwise, it's the 1.5 TSI EVO 150PS petrol powerplant, available in either 'Design' or plusher 'R-Line' levels of trim. With this larger engine, there's the option of a 7-speed DSG auto gearbox for an extra £1,600. Go for that with 'R-Line' trim and you'll need well over £33,000. Still, there's plenty of kit fitted across the range - in addition of course to the fully powered fabric hood. Even 'Design'-spec gets you 17-inch alloy wheels, Adaptive Cruise Control, ambient lighting, a Driver Profile Selection driving modes system and a Discover Navigation infotainment system with an 8-inch centre-dash screen. The 'R-Line'-spec version adds larger 19-inch wheels, lowered sports suspension, an R-Line styling body kit, LED headlamps, front fog lamps, more responsive 'Progressive steering' and a 10.25-inch 'Active Info Display' digital instrument cluster screen. Safety kit across the range includes autonomous brake ('Front Assist' and 'City Emergency Braking System'), plus lane Assist and a Driver Alert system.

The base 1.0-litre petrol model manages a minimum of 44.8mpg on the combined cycle and an emissions high of up to 121g/km of CO2. Upgrade yourself to the 1.5 TSI EVO petrol engine which can shut down un-needed cylinders of the engine when not in use and the figures are up 49.6mpg and up 130g/km for the manual. Or up to 47.9mpg and 134g/km for the DSG auto. Those figures are for based 'Design'-spec; they fall a little further with the 19-inch wheels of 'R-Line' trim. As for servicing, well as usual with Volkswagen models, there's a choice of either 'Fixed' or 'Flexible' maintenance packages. You'll choose the 'Fixed' approach if you cover less than 10,000 miles a year and with this, the car will typically be looked at every twelve months. If your daily commute is more than 25 miles and your T-Roc will regularly be driven on longer distance journeys, you'll be able to work with a 'Flexible' regime that can see you travelling up to 18,000 miles between garage visits - or every two years, whichever is sooner. And warranties? Well the standard package is three years and 60,000 miles.

Can this car provide everything? The desirability of a cabrio, the promise of sporty motoring and the practicality of an SUV? Of course it can't. But the target market probably won't care. The T-ROC Cabriolet looks great, it makes a great streetside statement and it won't require a lottery win to buy. Potential buyers will be sold already, whatever we happen to say here about stodgy handling, limited interior boot space, higher pricing and slightly compromised efficiency. So we won't bother to carp about any of that. This is, after all, a pleasure purchase that should be unconstrained by thoughts of sensibility. Yet you could own and run it (ideally as a second car) with very few practical compromises. And when the sun comes out, you'll be in your element.