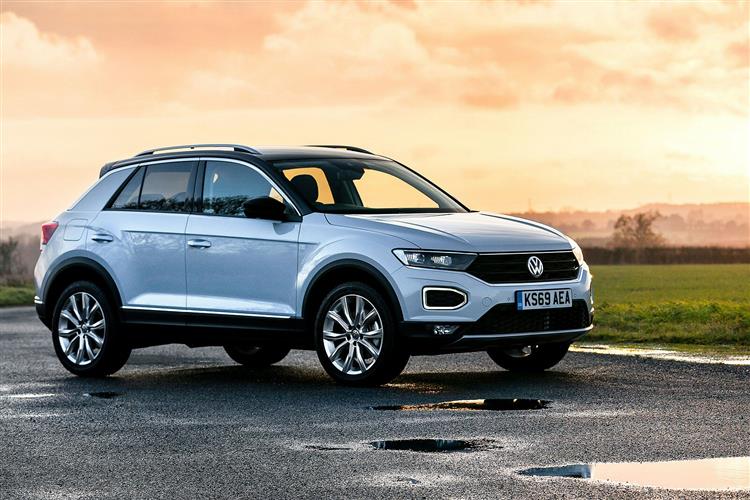 From launch in 2018, the T-Roc provided an entry point to Volkswagen's SUV range, but these days two models, the Taigo and the T-Cross, sit beneath it. So the T-Roc, which unlike those two Polo-based designs rides on the underpinnings of a larger Golf, needed a bit of a spruce-up to justify its continuing place in the range. Hence the mid-term facelift we examine here. It's supposed to appeal to customers who want something larger than a supermini-based crossover design, but don't want to stretch up to Volkswagen's mid-sized Tiguan SUV. People who want something trendier - which is why the T-Roc also comes in Cabriolet and hot hatch T-Roc R forms. There's lots of competition these days though, for this type of car. So this improved T-Roc will need to be good.

There are no petrol engine changes as part of this update: surprisingly, Volkswagen isn't introducing its mild hybrid tech. So, as before, there are four TSI petrol engines, a 115PS 1.0-litre three cylinder unit, a 150PS four cylinder 1.5 and a 2.0-litre powerplant offered either with 190PS - or with as much as 300PS in the top T-Roc R. Diesel options have been updated: you can select between a couple of the brand's latest, now-cleaner 2.0-litre TDI diesels, these offering either 115PS or 150PS. You'll also get the option of DSG auto transmission on most models - which you have to have with the T-Roc R. Engaging drive dynamics won't be a priority for T-Roc customers, which is just as well givemn what's on offer here, but as usual with a Volkswagen, you get a very well judged standard of ride. All-wheel drive isn't an especially popular customer option in this segment, but Volkswagen offers it with the 2.0 TSI and 2.0 TDI 150PS models - that's another thing that's mandatory on the T-Roc R. The brand has packaged up its 4MOTION system with plenty of extra features, primarily a driving profile selection system (which you can also order on a 2WD variant). This set-up gives you a choice of two on-road profiles ('Street' and 'Snow'). There are a couple of off-road modes too: 'Offroad' (which automatically sets the car up for 'off piste' use) and 'Offroad Individual' (which allows you to set various parameters). Other extras you can add include 'DCC' 'Dynamic Chassis Control' adaptive damping and 'ACC' 'Adaptive Cruise Control'.

The exterior styling tweaks made to this updated model are subtle. LED headlights and darkened rear tail lamps total the changes but you can add to them by paying extra for the brand's 'IQ LIGHT with LED matrix headlights' package. As before, there are three variants, the standard T-Roc hatch, the sporting T-Roc R and the T-Roc Cabriolet. In all cases, the fashionable looks stay much as before, a wide and long stance allied to a relatively low roofline, short overhangsand a steeply raked C-pillar. Inside, there's a smarter dash trimming panel. And a redesigned, more 'tablet'-like central infotainment screen, which can now be had in larger 9.2-inch form as well as the usual 8.0-inch size. All variants now get a digital instrument cluster too - optionally upgradeable to 10.25-inches in sizes in 'Digital Cockpit Pro' form. There's also a redesigned steering wheel and higher quality fabric door trim. As before, the two monitors combine to offer a wide range of online services and apps accessible via smartphone and the usual 'Volkswagen Car-Net' media connectivity system. As you'd expect, the 'MirrorLink'/'Android Auto' and 'Apple CarPlay' smartphone-mirroring systems are available, as is a 'Security & Service' package which provides support in a wide variety of situations. There's reasonable room for a couple of adults in the back. And luggage space in the fixed-top version is quite generous - measuring 445 litres when loaded up to the top of the second row seat backrests.

Pricing is much as before, which means that most mainstream T-Roc hatches will be sold in the £25,000-£30,000 bracket. You'll pay from just under £30,000 for the T-Roc Cabriolet - but well into £30,000 for the kind of spec you'll probably want. There's a big price jump to the high performance T-Roc R hatch - think around £43,000 for one of those. Key equipment features available as part of this model upgrade include the brand's 'IQ LIGHT with LED matrix headlights package. And Volkswagen's clever 'Travel Assist' system, which in concert with a new predictive ACC cruise control set-up can take care of a lot of the driving duties for you at highway speeds. It enables assisted steering, braking and acceleration at speeds of up to 130mph. By integrating the signals from the front camera, as well as GPS and map data, the system can incorporate local speed limit information, town boundary signs, junctions and roundabouts. For a bit more visual presence, you can now optionally specify an illuminating radiator grille strip and dynamic turn signal lighting. 'R-Line' models now get the super-supportive sports seats that were previously fitted only to the T-Roc R. There's also a range of fresh paint colours and some smarter 17 and 19-inch alloy wheel designs.

As you'd expect, the T-Roc is extremely class-competitive in terms of WLTP running costs. The base 1.0-litre petrol model manages up to 46.9mpg on the WLTP combined cycle and 136g/km of CO2. Upgrade yourself to the 1.5 TSI petrol engine which can shut down un-needed cylinders of the engine when not in use and the figures are 45.2mpg and 142g/km. As for the TDI diesels, well if you opt for the base front-driven 115PS variant, it should be possible to get 60.2mpg and 123g/km of CO2. For the 150PS 2.0 TDI variant, its 58.8mpg and 126g/km. All these are manual model figures. As for servicing, well as usual with Volkswagen models, there's a choice of either 'Fixed' or 'Flexible' maintenance packages. You'll choose the 'Fixed' approach if you cover less than 10,000 miles a year and with this, the car will typically be looked at every twelve months. If your daily commute is more than 25 miles and your T-Roc will regularly be driven on longer distance journeys, you'll be able to work with a 'Flexible' regime that can see you travelling up to 18,000 miles between garage visits - or every two years, whichever is sooner. And warranties? Well the standard package is three years and 60,000 miles.

Strip away the funky bodywork and the cabin personalisation and what you've got here is a slightly less efficient but slightly more expensive Golf. But then, you could say similar things of just about any other compact-to-mid-sized SUV contender in this growing segment. It's all about giving the market what it wants. And with the T-Roc, Volkswagen has done just that. Are there problems? Interior space perhaps. But then if you wanted that in a compact Volkswagen SUV, you'd probably stretch to a Tiguan. This facelifted T-Roc model improves the original car's issue that some of the cabin trimming felt a little down-market. Here, things are improved, though you might still want for more, given the pricing applied to plusher models, though there's enough technology provided to make this less noticeable. These top derivatives are quite expensive though, which brings into focus the fact that amongst rivals in this segment, there are plenty of slightly cheaper alternatives. Most of them though, lack this T-Roc's 'want one' factor.